The first recorded rowing club in Norwich was the City and Carrow Rowing Club -first recorded in 1882. This club was dissolved in 1892 and their boats were bought by the C.E.Y.M.S. Rowing Club, which had been founded two years earlier and rowed out of a boathouse in King Street.
Our club, then known as the Yare Rowing Club was founded in 1911 following the closing of the rowing section of the C.E.Y.M.S. (Partly due to arguments about rowing on Sundays).
They hired a boathouse near the “Thorpe Gardens” public house (the other side of the railway line, next to the present Broadland Boat Club, ex-Norwich Union Rowing Club) until 1915 when the brewers Steward and Patterson erected a new boathouse opposite the “King’s Head”, now The Rivergarden. At this time most of the Committee meetings were held at the Bell Hotel in the city centre.

The first officers of the club were: Captain – G.B. Elliott, Vice Captain – L. Bullen, Hon. Secretary – H.G. Loynes, Hon. Treasurer – A.G. (“Dusky”) Grimmer. The club was first granted affiliation to the Amateur Rowing Association in 1913.
Soon after the move to the present site the club started a swimming section with some hardy members swimming in the river all year round! After this there was not much activity for about three years as most of the members were called to serve in the First World War.
It is recorded that in 1921 the club had 100 members and a large fleet of boats including an eight.
Norwich School rowed with the club from about 1915 to 1926 and again from 1948 under the guidance of Ken Willmott, who had to give up a year later due to ill health. It was subsequently run by George Cooper until his death in 1979. George was the instigator of the country’s first long distance sculling race, the Norfolk Long Distance Sculling Championship in 1948 (from Surlingham ferry to Whitlingham) and was also Club Secretary from 1951 until 1960. 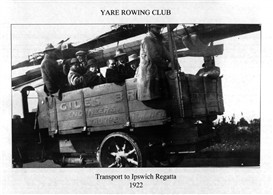 In 1973 the Yare Club split, with many of its members joining the newly formed Norwich Rowing Club at Trowse. However a core of members remained and came to be known as the Yare Sculling Club and took over the lease of the site.
Thorpe St Andrew School also rowed with the club under the guidance of Owen Thompson and later Robin Howes until finances and revised school timetables forced them to give up in 1995.
In 1980, the club once more changed its name and became the Yare Boat Club as it better reflected the activities of the members who occasionally race but mainly row for exercise and pleasure.
On 23rd July 1997 the main boathouse was completely destroyed by an arson attack, with the loss of 19 club and two private boats. Construction of the replacement building was quickly started, and the boat house was finally re-opened on 15th May 1999. Since then, the fitting out and re-racking have been completed, and the boathouse is once again home to a fine and ever-growing fleet of lovely new boats.